A child has been hit by a van in Loddiswell as local residents call for an official pedestrian crossing.

UPDATE: Kingsbridge Police named the child involved as nine-year-old Riley Bordas. A spokesperson for the police said: "His parents have allowed us to tell you that he had four hours of surgery today and is doing well. He has to stay in hospital for a while and has a really nasty broken leg but hopefully no long term issues. We wish him all the best."

Police were called at 4.10pm to South Brent Road, Loddiswell, close to the junction of Beechwood Park, where a child had been hit by a van. The driver was at the scene when police arrived and has been helping  with their investigation.

Police said: "The nine-year-old boy has been taken to Derriford Hospital with serious, but not life threatening injuries". It is thought he suffered a compound fracture to his leg that will require surgery.

Devon Air Ambulance was called but was "otherwise engaged" so a BASICS Doctor attended to support the paramedics on scene.

If anybody witnessed the incident or has any information, please contact the police by emailing 10900@dc.police.uk.

We have contacted Devon County Council about the possibility of a pedestrian crossing in the area. We will update when we receive a reply. 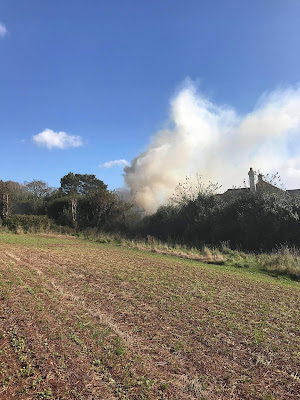 A large property was fully ablaze in Thurlestone this afternoon.  The blaze - credit Julia Hunn Update:  A spokesperson for Devon and Somerset Fire and Rescue Service said: "We initially mobilised one fire appliance from Kingsbridge, one from Ivybridge and one from Totnes along with an Operational Assurance Officer. "Due to the volume of calls coming into the control room a further two fire appliances were sent from Dartmouth and Plymstock along with the aerial ladder platform from Crownhill. "On arrival the incident commander confirmed a two storey property well alight. "At 13:46hrs, the first floor of the property is fully involved in fire with crews at work externally. Western Power have been requested to attend. "At 1621hrs, crews are currently damping down and turning over checking for hotspots. "This incident is ongoing." Eight fire engines are currently on scene and an ambulance on blue lights arrived in the village.  The road through the villa
Read more

Woman's search for her birth mum leads her to Totnes